According to the research of (The EIU) The Economist Intelligence Unit; Turkey has risen up six places on the democracy index in 2020. The Global Democracy Index declined worldwide in 2020. In the research, the negative effects of the epidemic process on democracy were mentioned. Annual survey assessing the state of democracy in 167 countries used five measures;the functioning of government, electoral process and pluralism, political participation, democratic political culture and civil liberties. In the report prepared by the British research and analysis company, the lowest rates of democracy in recent years were recorded. According to research since 2006, the year 2020 was the worst year for democracy. (5.37 out of 10) In Global Democracy Index, In 2019 Turkey's ranking 110, but its rose to 104 in 2020. 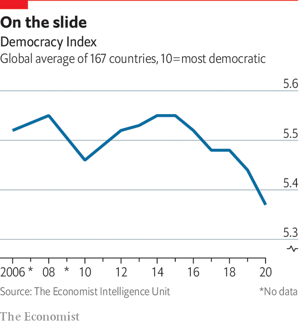 In the 2020 Democracy Index, North Korea ranked last, being the country with the lowest democracy. According to the research results, Norway was determined as the most democratic country. Due to the epidemic, the restrictions and controls imposed by the governments caused the "civil liberties" rating of the countries to decrease globally in 2020. France and Portugal were in the "full democracy" category, but fell into the "flawed democracy" category in 2020. Turkey, Italy and the UK including in the "status that makes countries better" in countries that had seen the biggest progress.